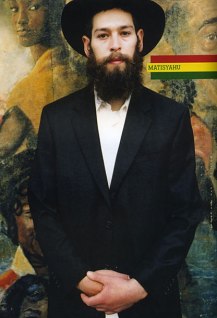 His real name is Matthew Paul Miller, but no one really knows calls him that. At least not his fans. He goes by his Hebrew and stage name which means «gift of God». He was born on June 30th, same as me, although three years earlier, somewhere in Pennsylvania. His family brought him up as a Reconstructurist Jew and much of his upbringing was spent in Hebrew school learning the pillars of Judaism. By the time he was a teenager, he began to rebel against this doctrine and experimented with hallucinogens and other drugs. At one point he auto-proclaimed himself a «Phishhead», and followed this band around on tour all over the country.
Years later this phase of his life seemed to fade away as he began participating in different heritage programs where he reconnected with his Hebrew roots and decided to adopt Orthodox Judaism as his philosophy of life. He began playing music with different Jewish bands and eventually adopted the name Matisyahu, the English equivalent of Matthew. Matisyahu’s musical style is heavily influenced by reggae, although he also fuses contemporary rap, hip hop and beatboxing styles to create quite funky rhythms.
As a member of a Hasidic sect Matishayu’s music is also heavily influenced by his Jewish roots, although he considers legends such as Bob Marley, Phish, God Street Wine, and Rabbi Shlomo Carlebach to be his main musical inspirations. However, since last year Matisyahu’s Jewish identity has begun to be questioned. In one of his most recent videos «Sunshine», he seems to have dyed his hair blonde, lost his ever-so-present yarmulka, and his lyrics are often contradictory with regards to the Hebrew history and geopolitical situation, which have all stirred great controversy among his Jewish community and followers.
Last night Matisyahu, who I consider one of my favorite musicians at the moment, performed in Hala Stulecia in Wrocław. I had been looking forward to see him live and eagerly awaited his arrival onto stage from my seat in sector A1. The concert, which was supposed to begin at 19:00, was delayed. Another pseudo-reggae group opened the performance and played for a little more than an hour. Matisyahu, who was scheduled to start at 20:00 seemed to also be delayed by technical or other difficulties.

From the moment he appeared on stage I was truly disappointed. Who was this guy dressed in baggy jeans, a sideways cap, and dark sunglasses? This «poser» looking attire was a totally different image to the one he used to represent. Without hardly even greeting his crowd, he began singing what appeared to be a new song. The sound was awful and it was quite hard to understand what the lyrics of the tune were. His attitude towards the crowd was pompous.  He later began stripping his layers down and jumping all around the stage like a madman. At a certain moment he clung exstatically onto the speakers as though he were high on something.
With the exception of his «Jerusalem» and «Chop Them Down» interpretations and maybe a couple of other songs, the concert was a true disappointment. Hardly any beatboxing took place and neither did he make an effort to speak to his fans or spread his message as not only a musician, but a leader of his community. His attitude towards the crowd and the moment were completely different to the down-to-earth, peaceful, in tune vibe that characterized him in recent years. His message and performance seemed contradictory and apparently, I’m not the only one who holds this belief.
In one of her articles, author Rachel Zimring states, «Matishayu is a voice for peace, appealing to fans via a clichéd call for universal acceptance of all religions and cultures and collaborating with a diverse variety of artists. Yet, Matisyahu´s work often (quite literally) utilizes Holocaust imagery and Jewish iconography to affirm the Jewish claim to Israel without reference to 20th century politics». He ignores, for example, the Palestinian situation.
Does this mean that we should add Matisyahu to the list of clichéd artists who proclaim universal peace and love through their lyrics, as well as the importance of cultural and ethnic identity, while displaying completely contradictory and weak performances to their fans? If he feels so committed to spreading his message, then why not use every available opportunity to do so?
The world needs more decisive leaders in music and less phonies and posers, however, as your fan I will opt to giving you a second chance and continue supporting your music, although your message is now questioned…
Anuncio publicitario